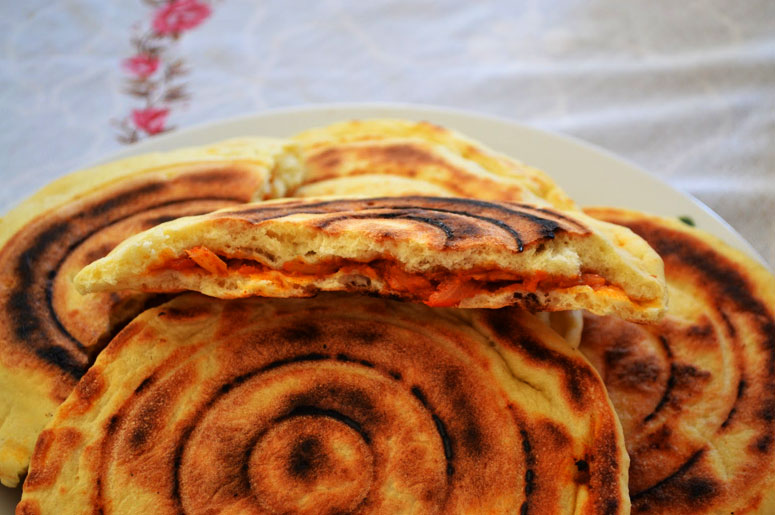 Its name may sound a bit strange for you, but the Mtabga is very well-known in Tunisia, especially in the South of the country. This stuffed galette is one of the most common snacks in the Tunisian culture.

The Mtabga is Berber specialty that was originally prepared in the South of the country and then quickly became a national snack. This southern specialty is a thick galette stuffed with a kind of shakshuka (carrots, onion, parsley, tomatoes, harissa…) cooked in a traditional pan. But the secret of its unique taste (a secret that isn’t very healthy) is the lamb fat that is usually added to the preparation. Obviously, the lamb fat isn’t an essential ingredient since it gives to the Mtabga a strong taste and some people may not appreciate it. If you want to keep a light taste, you can replace the lamb fat with extra virgin olive oil.

For the dough, you will need (for 4 persons):

For the shakshuka, you will need:

Zammour, a peaceful Berber village in the South of Tunisia

Tozeur, a fascinating cultural and tourist attraction of Southern Tunisia

Makroudh is a North African sweet pastry that has a diamond shape, most often served for special occasions and during Ramadan. Makroudh is prepared by filling a dough made…

Flavored olive oil can be the perfect addition to any dish to further enhance its flavor. It can be used in sweet or savory dishes, as it adds a special touch to any recipe.

Unlike their fresh ‘siblings’, sund-dried tomatoes aren’t widely used in our everyday life. Maybe it’s just because we don’t really talk about the benefits of this vegetable. Also, many people don’t think it’s possible…

Tunisian cuisine isn’t only about recipes and dishes; it’s about love and share. Each recipe has its own story and secrets. That’s why this Mediterranean cuisine is highly appreciated, not only in the United…