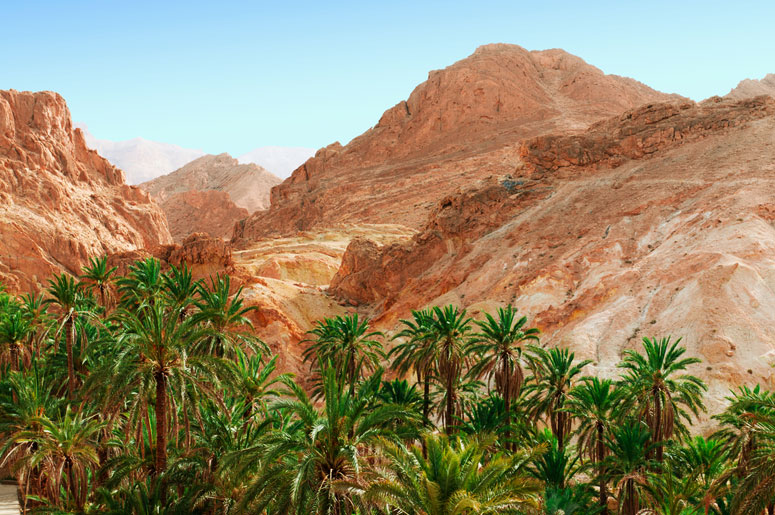 There’re many other hypothesis but no matter the origin of the name, today Tozeur is a beautiful city with an authentic charm and atmosphere, and a glorious religious past. Until the 19th century, Tozeur was an important cultural center that welcomed many theologians. This center even developed poetic traditions that has lasted until the 20th century.

One of the major specificities of Tozeur is its old town exclusively made with lay bricks. Masons even took the time to create beautiful patterns in relief on the facades, inspired by carpets and calligraphy. Small streets of this town form a mysterious and fascinating labyrinth.

The city is surrounded by a large palm grove (about 1000 hectares), with more than 400 000 trees. This plam grove is divided into small gardens to make its maintenance easier. Tozeur has a desert climate (hot and dry) with fresh nights that may become cold in winter. So if you’re planning to visit Tozeur, spring is the best time.

Mtabga, the Southern galette of Tunisia

When we talk about Tunisia, many people are fascinated by the beauty of the southern regions, with their Berber villages and vast deserts. The South of Tunisia has always kept a part of mystery,…

In our previous posts, we talked a lot about well-known places in Tunisia like the beautiful Djerba, the surprising Tozeur, the peaceful Kelibia, etc. And you’ve…

Who didn’t ever heard about Hammamet, this beautiful seaside town located in the south east of the northern peninsula of the Cap Bon. It is only 37 miles away from the capital, and…