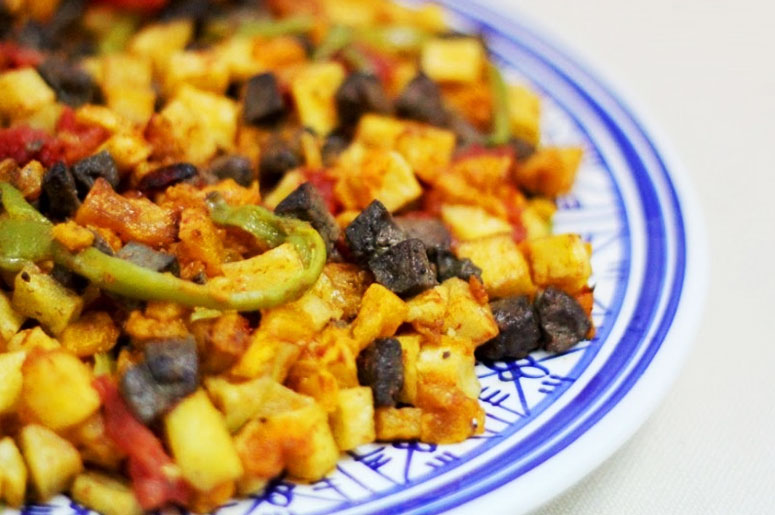 People in the US just discovered the Kafteji, a traditional Tunisian preparation made with fried vegetables. But in Tunisia, Kafteji have existed since many decades and quickly became a national dish, just like Lablebi, couscous, shakshuka, etc. This dish is very similar to a traditional dish in Italy called the Ciambotta, which is very well-known in the southern Italian regions.

Throughout the years, many recipes and versions of the Tunisian Kafteji appeared like the Kafteji Tajine, Kafteji sandwich, etc. But basically, the classical recipe is made with fried vegetables (zucchinis, eggplants, potatoes, tomatoes, pumpkins…) and eventually some eggs. These vegetables are fried and then cut into small pieces. We can add a fried egg for a more pronounced taste. In Tunisia, people like eating spicy dishes, so to make the Kafteji even tastier; they add traditional or berber Harissa.

Today Kafteji is served in almost all restaurants in Tunisia with a slice of escalope or some Tunisian sausage called Merguez. The secret of success of this national Tunisian dish? Fried vegetables, spices and of course, a good dose of love!

If you want to prepare a typical Tunisian kafteji, here’s the recipe. First of all you will need these few ingredients (for 6 persons):

Your kafteji is ready to be eaten. Bon appetit !

The Luck of the Tunisians

Traditional Tunisian wedding : 7 days and 7 nights to get married

I think there’s no need to introduce the Tunisian Harissa, since it has become a food staple, not only in Tunisia but also all over the world and even in the US. Today, we…

Flavored olive oil can be the perfect addition to any dish to further enhance its flavor. It can be used in sweet or savory dishes, as it adds a special touch to any recipe.