Sefsari is a fabric that envelops the female body from the head to the ankle and is the norm in pre-independence Tunisian society in many circles. It was a sign of modesty and served to hide the female forms of the contemptuous and curious looks of men. It is a beige / ivory color and can be made from silk or cotton. The price varied according to the material and its use, according to the occasion (market, marriage …). Since independence, Tunisian society has evolved gradually and the woman has emancipated to abandon the sefsari in the urban areas and to opt for the modern costume. Today, it is worn in some rural areas by women of a certain age; the girls being rejected. Some brides, however, wear it to go to the hammam during the week of the wedding. They are sold today in the souks of the Medina of Tunis and in other places in the different cities. 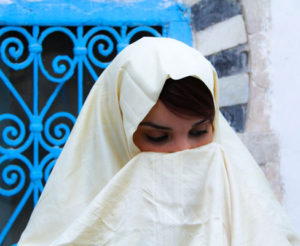 Habib Bourguiba, Itinerary of a Leader

In Tunisia, weddings are considered as one of the most important occasions in one person’s life and their preparation may take years. You’re probably wondering why does it take so long to prepare a…