The Shakshuka is one of the oldest and easiest dishes worldwide. And just like any other dish, there is an interesting story behind it. Some people believe that the word Shakshuka comes from a Berber word meaning a vegetable ragout. Other sources affirm that this word comes from the Tunisian, Egyptian and Libyan languages.

The original Shakshuka appeared in the Maghreb countries, and quickly became a staple in the Maghreb cuisine. The secret behind such success? An easy recipe that can be achieved even if you’re not the most talented home chef and that requires only few ingredients. In less than 10 minutes, you can have a delicious dish for your breakfast, lunch or dinner. 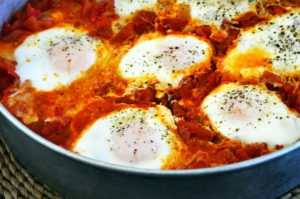 In the 1950s, many Tunisian Jews moved to Israel and introduced Israeli people to this special dish. The success was immediate, and there’s even a famous restaurant called Dr. Shakshuka in Tel Aviv. In the USA, the Shakshuka has become a trendy dish these last years, and they added a secret ingredient to the classic recipe: sugar! And with our Extra Virgin Olive Oil, it’s even tastier…

For those who didn’t try the Shakshuka, here’s an easy recipe. For the ingredients, you will need:

More details on the video below :

The history of pottery and ceramics in Tunisia

Dates are widely consumed in the US, not only for their unique sweet taste but also for their countless benefits. Tunisia has one of the best dates in the world, and among them the…

I think there’s no need to introduce the Tunisian Harissa, since it has become a food staple, not only in Tunisia but also all over the world and even in the US. Today, we…

Spring is finally here with its sunny days and warm weather. And since we’re getting ready for summer season (and obviously , we want to have THE perfect body for it), we’ll tend to…