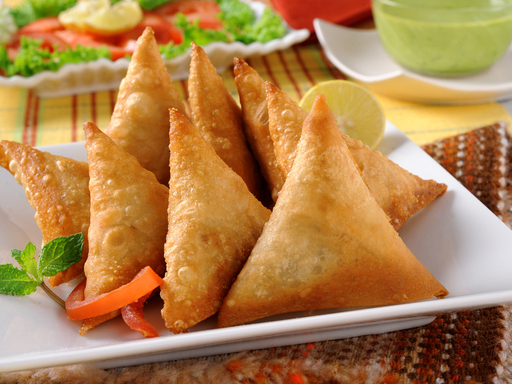 For this Monday Recipe, this week we are sharing The Tunisian Spring Rolls.

The brick pronounced ‘breek is a must in the Tunisian cuisine. It is generally served at Ramadhan.
It is based on a pastry shell, going by the name of Malsouqa, which is made by hand and is thin and circular-shaped. It’s formed in a triangle, with a filling in the middle.
The most popular version is the egg brik, which is filled in with a whole egg, parsley, and canned tuna. Ingredients such as harissa, capers, and cheese may also be added.

In general, this dish is indispensable at the table during the month of Ramadhan.
The pastry shell is a mixture of flour, water, and salt. Each family used to prepare the sheets of brick by hand and had a special copper tray for cooking the dough. Today the brick sheets are international, available on the market, ready to eat and adaptable to all kinds of cooking: traditional cuisine, fusion cuisine, exotic cuisine … If you try to spoil yourself with this delicious dish, here is a simple and effective recipe for 4 people, It is a specialty that can be varied and declined according to tastes and desires.

2 eggs
1 large potato, boiled and peeled
Salt & pepper
1/2 bunch parsley, finely chopped
Lemon for garnishing
1 jar of La Megara tuna belly ( drained )
1 Tbsp of La Megara Olive oil
2 Tbsp grated cheese
1 tsp of La Megara Berber Harissa
– Oil for frying
Preparation :
Mix all the ingredients in a bowl. Place some of the fillings on one side. Fold the brik in a triangular shape. Deep fry 3 to 4 briks at a time until briks are golden brown, about 5 minutes. Enjoy !

Meet the Chaouachis, the artisans behind the Tunisian Chechia

Add some HEAT to your 4th of July BBQ”

If you have traveled to Tunisia before, you had probably heard about the Tunisian tajine, this special dish made with eggs, meat, cheese and other ingredients.

For those who don’t know the Tunisian tajine, which…

These days, all the Muslim community is celebrating Ramadan, a holy month that lasts 30 days. And during these 30 days, Muslim fast all day and break the fast at the end of the…

People in the US just discovered the Kafteji, a traditional Tunisian preparation made with fried vegetables. But in Tunisia, Kafteji have existed since many decades and quickly became a national dish, just like Lablebi,…